Fasten your seat belts – Bill and Ted are going on another ride. 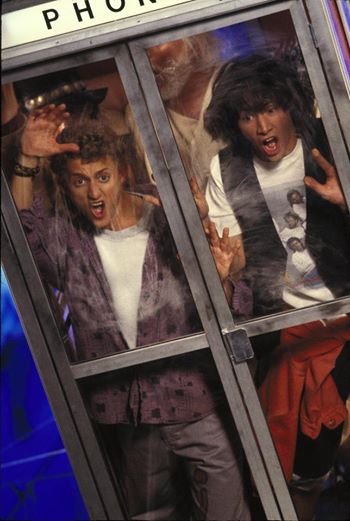 “[Bill & Ted] will be 40-something and it’s all about Bill and Ted grown up, or not grown up,” Winter said. “It’s really sweet and really f—ing funny. But it’s a Bill & Ted movie, that’s what it is. It’s for the fans of Bill & Ted. It fits very neatly in the [series]. It’s not going to feel like a reboot. The conceit is really funny: What if you’re middle-aged, haven’t really grown up and you’re supposed to have saved the world and maybe, just maybe, you kinda haven’t?” In addition to the two films, the Bill & Ted franchise includes two television adaptations both titled Bill & Ted’s Excellent Adventures, one animated and one live action. Both Winter and Reeves haven’t reprised their respective roles since proving the voice for their cartoon characters in one season of the series in 1990, right before the first sequel was made.

So, why the delay? “The thing we had going against us is that word got out,” Winter says. “That was kind of a bummer. It just takes a long time to put a movie together. Now we’re having to build this thing in public, which is fine. I just feel bad [the fans] have to get dragged through this long, boring, protracted process.”

Original screenwriters Chris Matheson and Ed Solomon have written the script for the film based on an idea formed with Reeves and Winter, and the team has secured a director in Galaxy Quest‘s Dean Parisot. “We’ve been working on drafts for the last couple of years,” Winter said. “The script’s been finished for a while, but comedy is so specific. We’re in that world where producers are on, financiers are on and we’re just working and reworking the script.”

Well, don’t work too much on it. Unlike Bill & Ted, we don’t have all the time in the world to wait!

Return to “TV and Movies News”